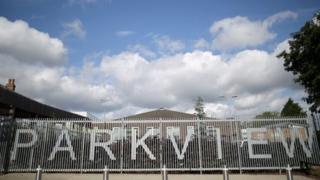 Two teachers who worked at the school at the centre of the "Trojan Horse" scandal have been banned from the classroom for life.

Mr Anwar and Mr Ahmed can apply to have their new bans set aside but only after minimum terms have elapsed.

The men had denied a central allegation they had agreed with others to the inclusion of "an undue amount of religious influence in pupils' education".

The National College for Teaching and Leadership (NCTL) said Mr Anwar would serve an indefinite ban for a minimum period of six years.

Mr Ahmed will serve a ban with a three-year minimum term.

Neither man is allowed to teach in any school, sixth form college, youth accommodation or children's home in England. They have 28 days to appeal against their bans to the High Court.

Last November, a panel recommended teaching bans, after concluding pupils had been "immersed in orthodox Islamic doctrine" through measures including the use of the school loudspeaker system to broadcast a daily call-to-prayer to Park View's pupils.

The panel also found while there was no formal agreement to change the character of the schools involved, there had been a co-ordinated attempt at the state-funded schools to include "undue religious influence".

It further found no evidence of Islamic "extremism" at work in the classrooms.

Thirteen former staff members including ex-head teachers at Park View Educational Trust (PVET) and Oldknow Academy have been facing misconduct hearings, as a result of the scandal's fallout.

The panel said it had heard "credible" evidence from a staff member who described the two men's roles as that of "generals" in contributing to making sure pupils were "fed a diet of Islam".

The panel also found their conduct tended to undermine tolerance and respect for the faith and belief of others.

Park View, part of PVET, was at the centre of anonymous allegations which claimed there was a wider plot by Muslim hard-liners to take control of several Birmingham schools.

The allegations sparked investigations by several agencies, including the Department for Education and Ofsted.

Following the scandal, Park View Academy was placed in special measures by Ofsted. It has since been renamed Rockwood Academy.