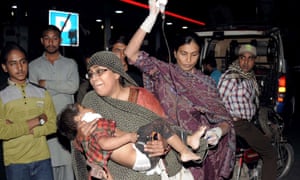 A woman carries a child injured in the explosion to hospital. The majority of those killed and injured were women and children. Photograph: Arif Ali/AFP/Getty

Kevin Rawlinson and agencies in Lahore

At least 69 people have been killed and more than 280 injured, most of them women and children, in an apparent suicide bombing directed at local Christians at a park in Lahore.

The explosion took place in the parking area of Gulshan-e-Iqbal park in the capital of Pakistan’s Punjab province, a few metres away from children’s swings. Deeba Shahnaz, a spokesman for the Lahore rescue administration, gave a figure of 300 injured.

A senior police officer, Haider Ashraf, said the area was crowded because Christians were celebrating the Easter holiday and many families were leaving the park when the blast occurred. He said the explosion appeared to have been a suicide bombing but investigations were continuing.

A Pakistani Taliban faction, Jamaat-ul-Ahrar, claimed responsibility and said Christians were the target.

“The target were Christians,” a spokesman for the faction, Ehsanullah Ehsan, told Reuters. “We want to send this message to Prime Minister Nawaz Sharif that we have entered Lahore. He can do what he wants, but he won’t be able to stop us. Our suicide bombers will continue these attacks.” 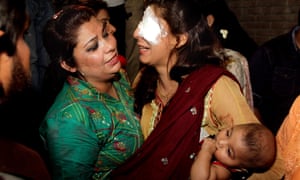 A woman injured in the bomb blast is comforted by a relative at a hospital in Lahore. Photograph: KM Chuadary/AP

Three days of mourning have been declared by the chief minister of Punjab, Shehbaz Sharif, according to Zaeem Qadri, a spokesman for the province’s government. Sharif pledged to ensure that those involved in the attack would be brought to trial, Associated Press reported.

Ashraf said the park was manned by police guards and private security guards. “We are in a warlike situation and there is always a general threat, but no specific threat alert was received for this place,” he said.

Salman Rafiq, an adviser to Sharif, had earlier put the death toll at 60 and said many of the wounded were in a critical condition. Later reports on Sunday suggested the figure could be much higher.

“There are more than 280 injured people. Many are in operation theatres now being treated and we fear that the death toll may climb considerably,” Rafiq said.

Nasreen Bibi, the mother of a two-year-old injured in the attack, spoke through tears as she waited for news from the doctors. “We were just here to have a nice evening and enjoy the weather,” she said.

“May God shower his wrath upon these attackers. What kind of people target little children in a park?” she said.

Footage broadcast on local television showed chaotic scenes in the park, with people running while carrying children, and cradling the wounded in their laps. 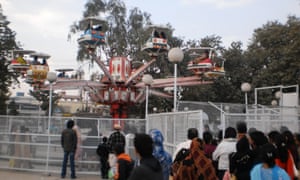 The playground at Gulshan-e-Iqbal park in Lahore Photograph: Geolocation

One witness, who was not named on Pakistan’s Geo TV station, said he was heading towards a ride with his wife and two children when he heard a huge bang and all four of them were thrown to the floor.

Other eyewitnesses said they saw body parts strewn about once the dust had settled after the explosion.

“When the blast occurred, the flames were so high they reached above the trees and I saw bodies flying in the air,” Reuters quoted Hasan Imran, 30, a resident who had come to the park for a walk, as saying.

Footage showed children and women standing in pools of blood outside the park, crying and screaming, while rescue officials, police and bystanders carried injured people to ambulances and private cars.

Dozens of women and children were seen being wheeled into hospitals covered in blood. Many of the injured were taken to hospitals in taxis and auto-rickshaws due to a shortage of ambulances. Hundreds of citizens arrived outside hospitals to donate blood.

Local TV channels reported that many of the dead bodies were being kept in hospital wards because morgues were overcrowded.

Soon after the attack, the Punjab government ordered all public parks to be closed. Main shopping areas were shut down and many key roads were deserted.

The army was called in to control crowds outside the park. Some distraught, sobbing relatives clashed with police and rescue officials.

In a statement from the White House, Ned Price, a spokesman for the US National Security Council, said: “The United States condemns in the strongest terms today’s appalling terrorist attack in Lahore,

“This cowardly act in what has long been a scenic and placid park has killed dozens of innocent civilians and left scores injured.”

He added that the country “stands with the people and government of Pakistan at this difficult hour. We will continue to work with our partners in Pakistan and across the region ... to root out the scourge of terrorism.”

Punjab has traditionally been more peaceful than other parts of Pakistan. Sharif’s opponents have accused him of tolerating militancy in return for peace in the province, a charge that he strongly denies.

Last year, a bomb killed a Pakistani provincial minister and at least eight others when it destroyed his home in Punjab.

Pakistan has been plagued by a Taliban insurgency, criminal gangs and sectarian violence. Punjab is the country’s biggest and wealthiest province. The Pakistani Taliban and other similar groups routinely carry out attacks as part of their aim to overthrow the government.

In 2014, Pakistan launched an offensive against the Taliban and affiliated fighters in North Waziristan in an attempt to destroy safe havens from which jihadis could launch attacks in Pakistan and Afghanistan.