Explosive detonated near children's rides at park.By Our Pakistan Correspondent 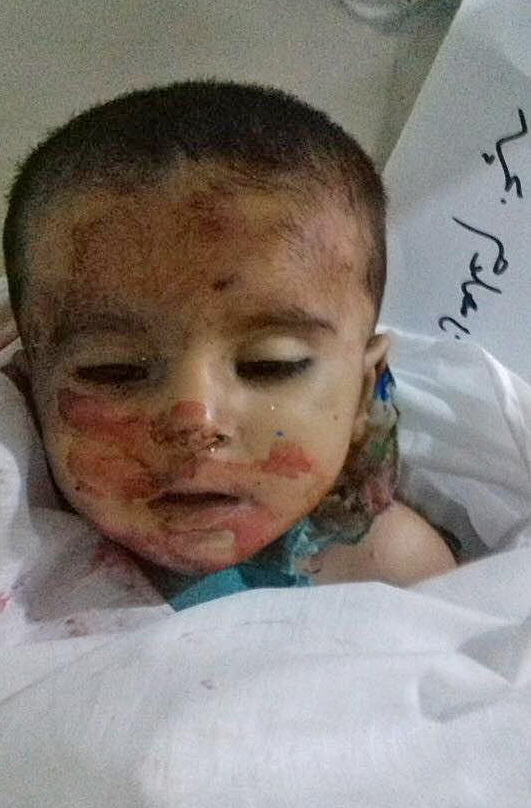 At least 70 people have been reported dead, most of them women and children, while more than 350 others were seriously injured and are being treated at hospitals. The condition of at least 138 of the injured was said to be critical.

“We claim responsibility for the attack on Christians as they were celebrating Easter,” Ehsan said in the statement, adding that the attack had been carried out under an operation code-named Saut Ul Raad (Sound of Lightning), "which will continue throughout this year.”

“It was part of our annual martyrdom attacks we have started this year,” Ehsan said, adding that “we had been waiting for this occasion … We want to convey to the ruling Pakistan Muslim League-Nawaz (PML-N) and the prime minister that we have arrived in Punjab and we will reach you.”

The dead included at least 45 Christians and 25 Muslims, including women and children, according to unofficial reports.

A Christian at the site of the attack, Amanat Masih, said he had brought his three children and two nephews to Gulshan-e-Iqbal Park to celebrate Easter. He lost two sons and a nephew in the attack.

“We were just here to enjoy the weather and have a good evening,” he said, wailing as a rescue worker tended to his injuries. “What kind of people target innocent people and little children in a park?”

“The bomb was packed with ball bearings for causing maximum deaths and injuries,” he said.

Iqbal said that adequate security arrangements had been made at the park, especially for Easter, as a large number of Christians belonging to lower and lower-middle income classes thronged public parks on religious holidays.

“Police and private security guards were deployed at the park, but it’s impossible to thwart a suicide bombing,” he said. “We are in a warlike situation, and there is always a general threat, but no specific threat alert was received for this place.”

TV footage soon after the bombing showed children and women standing in pools of blood outside the park, crying and screaming, and rescue officials, police and bystanders carrying the wounded to ambulances and private cars.

Dozens of women and children covered in blood were seen being wheeled into hospitals. Many of the injured were transported to hospitals on taxis and auto-rickshaws due to a shortage of ambulances. Hundreds of citizens arrived outside hospitals to donate blood.

Most of the injured and dead were women and children.

Javed Ali, a 35-year-old Muslim who lives opposite the park, said the force of the blast had shattered his home’s windows.

“Everything was shaking, there were cries and dust everywhere,” he said. “After 10 minutes, I went outside. There was human flesh on the walls of our house. People were crying, I could hear ambulances.”

The park was crowded because of Easter with many Christians there, he said, adding, “It was so crowded, I told my family not to go.”

Another witness, Tariq Janjua, said that he had just left the park when he heard an explosion. He said a friend was still missing.

Esther Murad, a Christian woman who teaches at a local government school, told Morning Star News that a family in her Christian neighborhood of Bihar Colony had lost four members – three of them young children.

“What a brutal end to Easter celebrations,” she said. “Words cannot do justice to their pain.”

A doctor at Government Jinnah Hospital told Morning Star News that more than 40 bodies had arrived at the hospital.

“The number of injured stands at more than 350 people,” he said. “Of them, 138 are in critical condition. I fear the death toll will rise.” 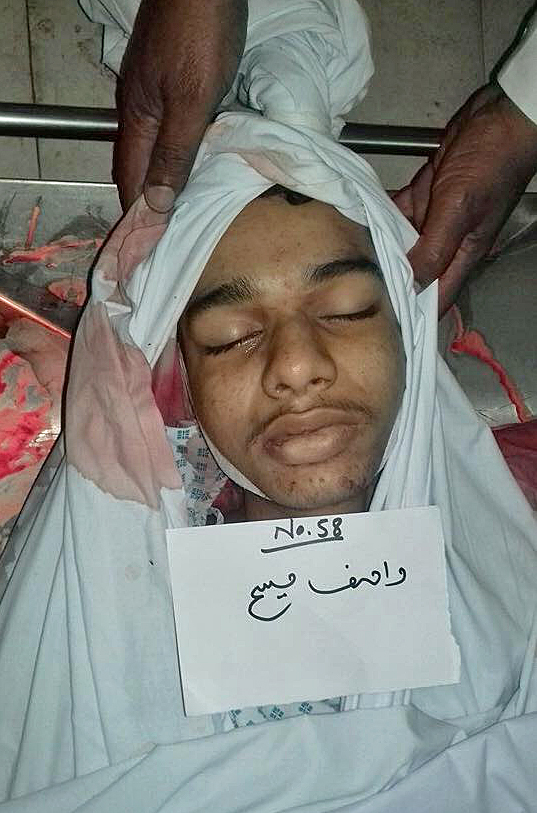 He described a nightmarish scene at the hospital, with staff treating casualties on floors and in corridors.

The army was called in to control crowds outside the park. Some distraught, sobbing relatives were also seen clashing with police and rescue officials.

Soon after the attack, the Punjab Province government ordered all public parks to be closed and announced three days of mourning. Major shopping areas were shut down, and many of the city’s main roads were deserted. All private schools in the city and business community were told to shut down for a day to mourn the victims.

The suicide bombing was the deadliest attack in Pakistan since the December 2014 massacre of 134 schoolchildren at a military-run academy in Peshawar.

Protests by Islamist Zealots
While Prime Minister Nawaz Sharif “condemned the Easter bombing in the strongest terms and assured justice to the mourning families,” and the country’s powerful army chief, Gen. Raheel Sharif, ordered intelligence and security services to “arrest the perpetrators of the attack,” Islamist extremist groups continued to mock the state’s writ with impunity.

On Sunday (Mar 27), Sunni extremist group Pakistan Sunni Tehreek and other Islamist outfits gathered in Rawalpindi to observe the Chehlum (completion of 40 days of mourning) for Mumtaz Qadri, the executed assassin of former Punjab Gov. Salmaan Taseer. Thousands of Islamist activists, approximately 25,000 according to some intelligence estimates, then marched towards the federal capital, Islamabad, where they went on a rampage, storming police barricades and setting government vehicles and private property on fire.

At least three people were killed and several others, including 31 Rangers and police personnel, were injured in violent clashes. Government forces tried to stop the protestors from entering the highly sensitive Red Zone, which houses government offices, the parliament and official residences of the president and prime minister, but failed and retreated far from the mobs.

The government then deployed army troops, as protestors staged a sit-in protest at the sensitive D-Chowk area of the Red Zone, refusing to leave until the government accepted their demands. Their greatest demand was the immediate execution of Aasiya Noreen, commonly known as Asia Bibi, a Christian mother on death row for allegedly blaspheming against Islam’s prophet.

Salmaan Taseer was a leading advocate for Noreen’s release and had publicly criticized the misuse of the blasphemy laws. This criticism led Mumtaz Qadri, a police bodyguard assigned to Taseer’s security, to murder him in broad daylight in Islamabad on Jan. 4, 2011. Taseer was shot 29 times as other police guards looked on.

Qadri was arrested and charged with murder amid massive protests by Islamist outfits. Nearly five years after Taseer’s killing, his murderer was executed on Feb. 29 this year, prompting large protests against the government and the judiciary. Thousands attended his funeral in Islamabad as the government ordered a media blackout of the event.

Islamist zealots have been protesting against Qadri’s execution on every Thursday in Lahore and other main cities since the sentence was carried out.

Amid fiery anti-government speeches on Sunday (Mar. 27) and threats of besieging Islamabad, Islamist leaders had plenty of time to mobilize their ranks for a show of force as government agencies chose to look the other way. Speaking to Morning Star News from Islamabad, a district administration official who requested anonymity said that the government had allowed Qadri’s supporters to congregate in the capital on the assurance that they would not resort to violence and damage public property.

“But these mullahs went back on their promise and stormed the capital city,” he said. “Our police and paramilitary forces failed to control the situation, and now the army has been deployed to protect the government offices and other important buildings.”

He added that the government would not succumb to pressure, “but it is in a state of confusion as to how to deal with this situation.”

According to demands presented to the government by the Islamist protestors, the government must immediately execute Noreen, whose appeal against the blasphemy conviction is pending in the Supreme Court; execute all Christians facing blasphemy charges; impose sharia (Islamic law) in Pakistan; officially declare Qadri a Shaheed (martyr) and take responsibility for his “illegal execution since he had only carried out a task which is obligatory on all Muslims, i.e. to kill anyone speaking against Prophet Muhammad”; not even consider amending the blasphemy laws; and force the minority Ahmadi Muslim community (considered infidels by majority Muslims) to go into exile.

Pakistan’s blasphemy laws have been widely condemned both outside and within Pakistan as they are blatantly misused to settle personal scores and vendettas.

As Pakistani Christians mourn the victims of the Easter bombing, Christian rights activists are voicing fear for the lives of Noreen and other Christians suffering in prisons on charges of blasphemy.

“The situation for Christians in Pakistan is getting increasingly dangerous,” said an activist, who sought anonymity over security fears. “On one hand, the Taliban are saying that they will launch more attacks on Christians, while on the other hand the government is being pressured by Islamists who want to keep non-Muslim citizens of Pakistan subjugated through the blasphemy laws.”

He said the government lacked the commitment needed to fight terrorism and religious extremism.

“Until the government and its intelligence apparatus give up their policy of running with the hare and hunting with the hound, things will only deteriorate,” he said. “This is a war between two mindsets, and it is now up to the state to decide how many more innocent lives will be lost to religious extremism, which is eating up Pakistani society like cancer.”

If you would like to help persecuted Christians, visit http://morningstarnews.org/resources/aid-agencies/for a list of organizations that can orient you on how to get involved.